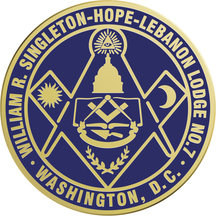 Barristers Lodge No. 48, as the name suggested composed largely of members of the legal profession, was consecrated on February 6, 1929 and merged with the former Lebanon Lodge on January 18, 1977. After these four Lodges were officially merged in 1987, the lowest and oldest number was accepted, and the name became William R. Singleton-Hope-Lebanon Lodge No. 7.

Historic Facts of the Month